The Scent of a Man

I’m not a grandparent yet, but I do have a granddog.  Her name is Ginger and she is my eldest son’s best friend.  She loves that boy of mine…it’s a Where the Red Fern Grows kind of love.  When he is gone, she misses him so much that she drags anything with his smell on it…hat, shirts, socks, shoes, pants …to where she perches on the couch.  She lays there with all his things around her…soaking in his smell.  It seems to make her less lonely for him. 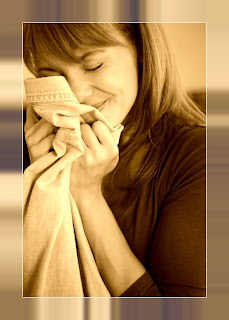 In the first months after Steve died, I was much like Ginger.  I would go into his closet and nuzzle in his coats and jackets.  They still had his wonderful smell.  I would hug them and cry into them.  And like Ginger, it made me a little less lonely for Steve.
But 14 months have passed and Steve’s smell is gone
And I don’t have that to make me
A little less lonely.
It is my great fear that as time goes on
I won’t even remember his smell.
And knowing that might happen
Makes me ache for him.
I ache for him.
27
Cyna
Posted by Cyna at 10:17 PM

Your posts are always so eloquent even though you are in obvious pain that I cannot even begin to sympathize with. I love your use of words to attempt to cope with your pain. Your blunt honesty is refreshing in a world full of people hiding behind a set of masks to ironically mask their pain, hypocrisy, etc... I just want you to know every time someone reads your words it effects them. It helps you to get things off of your chest and remember yet it also helps others because someone else may never have honestly written something similar they can relate to etc... I wish I could say anything to ease this aching/ loss you experience daily. I cannot and no one can. I am sad every time I go into his office because I know I won't hear his booming voice and silly jokes. I know this is NOTHING in comparison to what you feel daily but I just wanted you to know I feel your posts are note-worthy and touching. Is it weird I look forward to your "27" posts?

Twenty-seven is a special number in my family. It began with my husband and I telling our children that we loved them 24/7. The boys "squashed" that expression to "twenty-seven." Even though my boys are now men, 27 is still our code for I love you all the time.
I lost my beloved husband, Steve, July 5, 2010 from complications following a routine surgery. His sudden death changed every facet of my life and rocked me to my knees. While my future is dark and scary, I know that I don't walk this path alone.
27, Steve. 27.